Heidi Zak is no stranger to revolutionary ideas. Her bra and underwear brand, ThirdLove, offers its trademark half-sizing to their customers–a completely unique and revolutionary idea. Listen in as Heidi shares how the idea for ThirdLove came about, how she left her job at Google to begin the company, and how her experiences helped her as an entrepreneur.

As of October 2018, Forbes estimated ThirdLove to be worth $750 million and was placed on the Forbes Next Billion Dollar Startup List.

ThirdLove was founded by husband and wife Heidi Zak and David Spector. They left their jobs and launched the company in a loft in downtown San Francisco in November 2013. Through a Craigslist ad, the company gathered one hundred participants, who were told to take a photo of themselves wearing a tight tank top over their bras. While the R&D session was intended to refine an app for calculating bust size, Zak found that the bras themselves needed improvement. When the participants tried on ThirdLove’s bra prototype, they found out that 37 percent of them fell between cup sizes.

Ra’el Cohen, the founder of lingerie company Luv & Honey, joined ThirdLove and used the data from the Craigslist fittings to create the company’s own proprietary molds. ThirdLove became the first bra company to create half-sizes. ThirdLove was introduced to the startup Indi Custom which was developing a smartphone-based technology to customize jeans without fit models. They acquired the company and adapted the technology for bras, taking two years to develop the company’s patented technology app. They launched the company bra line in the spring 2014 with seven distinct styles. Within three months, they identified “24/7” as their best style and discontinued producing the other six styles. In 2015, they found a manufacturing partner in China that was willing to include their proprietary design elements. As of late 2016, the company shipped approximately 50,000 bras a month. ThirdLove expanded into underwear, as well as lounge and sleepwear.

In 2019, they opened their first pop-up shop in Manhattan’s Soho neighborhood. 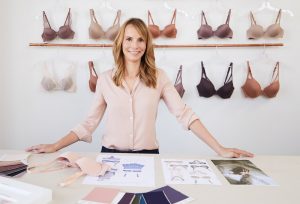